As in each of the blog entries I have done over the last few weeks, I need to qualify my work by pointing out the complexity of the print market and that I am defining and describing the market with generalizations that could easily be argued.  I am also doing this for the first time with relevant diagrams that are not meant to accurately reflect market sizes but instead meant much more as a tool of general perspective. 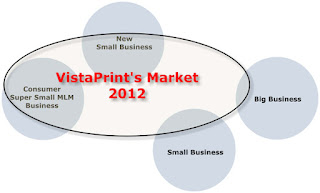 The first diagram represents the Vistaprint share of the market.  I would argue that Vistaprint created the "Consumer, Super Small, MLM Business" print market.  There were products being sold to this market prior to the 'Vista era', but those products are specialized and are still being handled by specialized 'high-service' companies and the trade suppliers that supply those local 'high-service' companies (ie: wedding invitations).  Vistaprint, I would argue is not in the printing business, but in the data collection and marketing business.  The real issue with Vistaprint is their presence and the perception they have created in the marketplace.  It is also without argument that their market share continues to grow faster than the market.  I would go as far as saying, they have played the Internet game as well as anyone. 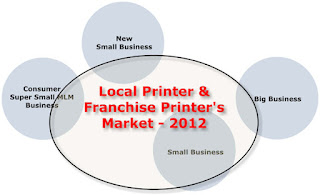 The second diagram represents the local 'high-service' market.  Suppliers in this market include the traditional local independent printer/quick printer, the franchise quick printer and entering this market recently (last 15 years) are the office products super stores (Staples, Office Max, Office Depot) whom I will generically refer to them as McPrint.  I group these all together as they satisfy the exact same markets and their trade print suppliers are the same as well.  The local independent printer and franchise printer, whom I consider the 'high-end' of this market are obviously squeezed in the market by the "online mega-print website"(Vistaprint), the McPrints and now, add to that, the postal service stores most recently. 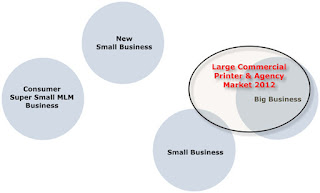 Finally, the last supplier of print, as depicted in this diagram, is that to Big Business and that Large Commercial Printer and Agency Supplier.  These are the least threatened by the Internet supplier, but are much more threatened by the Internet itself (ie: Britannica ending print versions this year, thinner magazines, etc.).  Where this does come into play in the local market is that many of these printers are the trade printers that supply products and services to the local printer.  Obviously a complex, complicated and convoluted business market - and I am only scratching the surface.  Add technological improvements, economies of scale and an abundance of used 'old-technology' equipment on the market and the business is beyond understanding and really 100s if not 1000s of different businesses.

So what will LightsOn Graphics business game be?  Making the 'local', whomever that may be, much more efficient and creating an advantage over the threat from Vistaprint.  Several big companies have Vista kill projects - We have the answer that makes this possible - which will save this local service market and ultimately keep quality up and prices in check for the consumer - stay tuned.