Written for Published in Print Exclusively In the Windham Eagle, Windham Maine - January 22, 2016
Governor LePage was in Windham Tuesday night speaking and almost sounding like he was giving a State of the State address.

Of course I don't agree with everything he says, but then again, it would be a boring world if I did.

We heard a lot of statistics from Governor LePage; statistics that were probably very accurate, but presented in such a way to embellish the benefit or the problem.  Don’t get me wrong, I embellish, you embellish, and we all embellish to defend our beliefs.  What Governor LePage is, is honest - to a fault - "Tell me what you really think Governor", said by NO ONE. We will have to work on some of those issues where we disagree.

I like Governor LePage because I know He reads his mail - he proved that to me last night.

But let’s expand on what I think will solve all our problems (after all, this is an editorial).  Problems that both political parties spout and I am pretty sure both parties will agree. Keep the best and the brightest here in Maine.  Do this by "Making Maine Cool".

Someone needs to market to big business and bring them to Maine – That’s a great thing for small business as big business creates a lot of supporting small business.  Prime the pump - seed the farm – market Maine – Get to the executives before they make their decisions - That is YOUR JOB Mr. Governor.  That means marketing and selling, yes selling, to them all the time.  It is in my belief that every CEO in this country will take your call and meet with you - I can’t imagine anyone not taking your call – not taking your meeting.

Our brightest are not flocking to Texas because of the better paying jobs - Just the opposite, jobs are lower paying – It is not about pay - there are just a lot of jobs.  California, most notably is losing jobs to Austin - where the slogan is "Keep Austin Weird."  Austin is an exciting vibrant city – It’s cool.

I heard someone say Tuesday night that “… greater Portland area Democrats are doing everything they can to turn Maine into San Francisco East …" - wouldn't it be a great thing if people, when referring to the High-Tech Bay Area were talking about CASCO BAY?

When we are done Making Maine Cool, we can change this saying to Keep Maine Cool.  Governor LePage, are you listening?
Posted by Bob at 10:01 AM 0 comments

Published in Print Exclusively In the Windham Eagle, Windham Maine - January 15, 2016
Prediction One - Business to itself will flourish and grow over the next five years going from good to great.  The markets, which have been growing slowly over the last few years, will continue to grow except that they will be accelerating.  For the last five years we have been in a "replacement" market.  This market has become the norm for our society today.  We, in general, have not been buying products because we wanted them, but because we needed them - "our old one broke down".  In the next five years, business and market growth will accelerate as there is a pent up demand for the "I Wants" rather than "I Needs".  This points to good times. 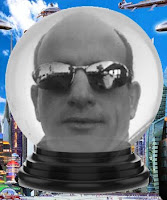 Prediction Two - Financial instrument marketers will become more aggressive with the offering of more aggressive products.  Aggressive investment capital was stifled for several years for two reasons, the media told us of impending doom and the investment / tax rules were in flux - we like to invest where we know the rules.  Today, there is still huge pent up capital "waiting on the sidelines", but looking, for a place to flow.  In the next 5 years it will flow, possibly like it has never flowed in the past and probably not peaking for 20 years - yes, a twenty year boom.  This points to good times.

Prediction Three - Business and life are being redefined by our dreams and desires.  In the past, it has always been about security and consistency, which came with stress and vulnerability.  We will see more people stepping out (even if they are forced out) taking on the world satisfying their own entrepreneurial desires and wants setting their own destinies.  This will create jobs, wealth, and be a major part of our future and the economy.  This points to good times.

So where are all these opportunities - examples please?
Entrepreneurism will not only be the future, but the thing to be.

"A True Entrepreneur does not think they can, they just don't know why they can't" ~rel